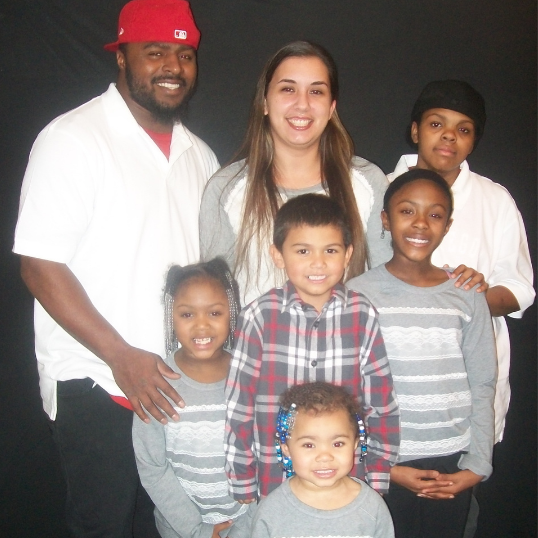 As a middle linebacker for the semi-pro Muskegon Mustangs football team, Stephon Betts knew what it was like to breathe hard and feel pain.

That’s what he felt as he trotted off the field at halftime in a game against the Lake Michigan Havoc on that warm June 20, 2015, evening at Oakridge High School in Muskegon, Mich.  At 31 years old, he assumed the pain in his chest and shortness of breath was probably due to overheating and dehydration, the rigors of playing a demanding game on a warm day.

Stephon drank lots of water, took his uniform and equipment off and tried cooling down under a cold shower. Meanwhile, his wife Nichole – they had just gotten married the previous December – ran to the store to buy him a bottle of Powerade.

After the shower and drinks, Stephon felt better. He thought about returning to the game. After all, the young lifetime athlete couldn’t imagine anything was seriously wrong with his health. But with the Mustangs up 29-0, his coach saw no reason to send him back in. His wife insisted that he go to the hospital.

On the way, Stephon began vomiting and had trouble breathing. He was taken to the Emergency Room at Mercy Health in Muskegon to check his blood pressure and other vital signs. It was the last thing Stephon remembers from that day.

An electrocardiogram (EKG), a test that checks for problems with the heart’s electrical activity, did not reveal any heart problems.

“From the time he walked off the field, I could tell something wasn’t right,” said Nichole. “When his heart stopped for the first time, I was terrified. I just couldn’t believe any of this was happening.”

Four times, medical personnel at the hospital tried to shock his heart back to life with an automated external defibrillator. He was rushed to the cardiac catheterization laboratory, where he underwent a coronary angiogram, an X-ray test that uses a special dye and camera (fluoroscopy) to take pictures of the blood flow in an artery. The angiogram revealed his left anterior descending artery – the artery medical professionals dub the “widow-maker” – was blocked.

Since this artery is critical to the functioning of the heart, if it gets completely blocked it will cause a massive heart attack that can quickly lead to death.

The blockage was treated with a balloon angioplasty, a procedure in which a catheter with a balloon is inserted through the skin and inflated in the artery. Doctors treated six clots in all – clots that appeared to be quite new.

Despite healthy looking arteries, Stephon’s blood kept clotting. Stephon’s heart, which also had looked healthy, became weaker and weaker and had trouble pumping blood to the rest of his body. An ultrasound of the heart called an echocardiogram showed that his heart’s ejection fraction was only 5 percent. That meant Stephon’s left ventricle was pumping out only a small fraction of the blood that a normal heart pumps with each beat.

As a result, Stephon was in cardiogenic shock: His heart suddenly could not pump enough blood and oxygen to his body’s vital organs. Cardiogenic shock is a rare and serious condition affecting about 40,000 to 50,000 people a year. If Stephon’s heart did not get help pumping blood to the rest of the organs, he would die.

Although treatment options for cardiogenic shock have been limited, advances in medicine are allowing for improved survival rates for people experiencing this condition. Stephon was placed into a medically induced coma. The doctors considered performing open-heart surgery, but agreed his heart was too weak to undergo the procedure.

So his interventional cardiologist, Dr. Thomas Hill of Mercy Health, proposed that Stephon was a good candidate for an Impella CP® pump, the world’s smallest percutaneous heart pump. The Impella is the only minimally-invasive (percutaneous) heart pump determined safe and effective by the U.S. Food and Drug Administration to treat cardiogenic shock. This device, made by Abiomed, could temporarily assist his heart function.

The Impella was small enough to be threaded from Stephon’s femoral artery near the groin to his heart’s main pumping chamber. There it began to take over a significant portion of his heart’s work, pumping blood throughout his body restoring blood flow to his brain, kidneys and essential organs. By allowing his heart to rest, the hope was that the little Impella pump would enable Stephon’s heart to recover native heart function – essentially, repair itself – and prevent irreversible end organ damage.

After two days on the Impella pump, Dr. Hill and his colleagues determined that Stephon’s heart had healed enough to pump on its own again. The heart pump was removed. “Given the severity of Stephon’s condition when he first arrived at the hospital, it is truly incredible not only that he survived, but was able to go home so soon,” said Dr. Hill. “There is no doubt in my mind that the Impella pump played an important role in Stephon’s survival and recovery.”

A week after Stephon’s event, and the game against the Lake Michigan Havoc, the Muskegon Mustangs took on the Traverse City Wolves at home. Mustangs’ jerseys with Stephon’s number  9 were a hot item at the souvenir stands. All of the proceeds from the game against the Wolves, including the ticket sales, concessions and merchandise, went to help the Betts family with Stephon’s medical expenses and time off work.

It was a touching and unexpected tribute to Stephon, who had been a key element to the Mustangs’ defense. But not as unexpected as who was standing on the sidelines at the Wolves game, cheering on the Mustangs.

Less than a week after his near-fatal event, Stephon was back on the field, this time he wasn’t playing, but instead he was receiving numerous hugs and well wishes from players, coaches and fans.

“On Monday when I was up there with him (in the hospital) it wasn’t looking so good and come Friday he’s being sent home.”

Stephon’s heart issues have meant stepping off of the playing field and taking on new roles with the Muskegon Mustangs as a part owner of the team and linebacker coach. He is still at every game, and now he is also out in the community building support for the team, a job made a little easier by the team’s recent success. Although he couldn’t be there in person, Stephon cheered on the Mustangs in January 2016 as they capped off an undefeated season by winning the National Championship in Daytona Beach, Fla.

In addition to his football commitments, Stephon recently returned to work at Hanson’s Cold Storage. What strikes him most about the whole incident is that it could happen to anyone. In fact, after his heart attack, Stephon reconnected with an old friend on Facebook. Several days later, the friend died very unexpectedly of a heart attack. Stephon has become much more careful about what he eats, and he often tells friends to have their hearts checked out.

He and Nichole, who purchased their first house in May 2015, are focused on keeping Stephon healthy and raising their seven children, which is no small task. In fact, they are planning a vacation for the whole family, possibly to Niagara Falls or Florida, and have even put together a bucket list to make sure they don’t miss out on life. They aren’t wasting any time, either, as Stephon attended his first NFL game in Detroit last fall between the Lions and the Minnesota Vikings.

“I tell my kids, don’t take anything for granted,” Stephon said. “Life is a gift and you have to make the most of every day.”