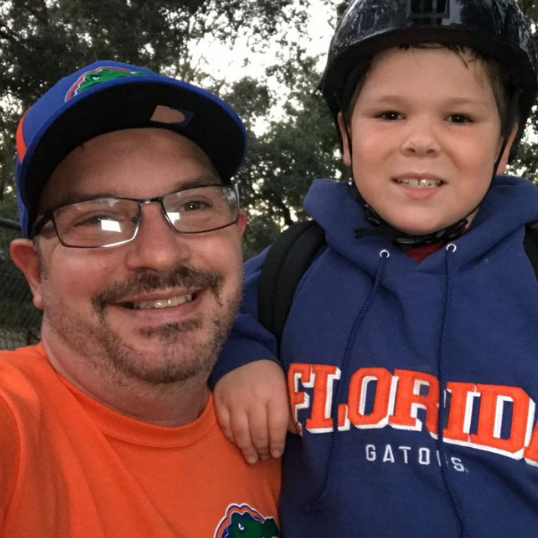 Michael Duncan, a credit union member service representative and medical courier, celebrated his 48th birthday with his family. During the day, he noticed a feeling of discomfort in his chest, but since he had no prior history of heart issues, he assumed this discomfort was indigestion.

The discomfort returned at 4:00 a.m. and Michael could no longer ignore it. He told his wife to call an ambulance and shortly after the EMTs arrived. Michael’s pain seemed to go away as the team ran an EKG and the tests revealed he was not having a heart attack.  However, the EMTs quickly took him to the Shands Hospital at the University of Florida ER for further testing.

When Michael arrived at the emergency room, he suffered a massive heart attack and coded for over 40 minutes. Michael had an almost 100% blocked LAD – known as the “widow maker” – as well as additional blockages. He was also experiencing seizures and the staff feared he might have internal bleeding.

Once the CT scan confirmed there was no internal bleeding, Dr. Michael Massoomi implanted the Impella® heart pump to support Michael’s weak heart while sedating him. By his family’s side was his friend, Scott Schuppie, who had suffered a heart attack four years prior and recovered with the help of the Impella heart pump. He offered support and a sense of hope to the family, just as Michael had provided to his family years before.

Just two days later, Michael’s condition dramatically improved and the Impella was removed. His heart began to recover. Several days after entering the emergency room, Michael was discharged from the hospital with a recovered heart. His life has since returned to normal, and he walks between one and three miles a day. Michael cherishes every moment spent with his family and friends.