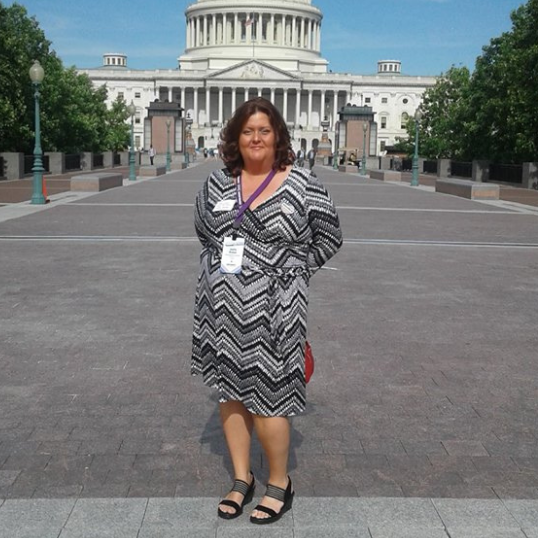 Joella Bobak, 44, was at her home in Johnstown, PA, with her husband, Peter, when she began to feel pain and numbness in her arm. She thought she was going to be sick.
​
Peter knew it must be serious when Joella said that she might need to go to the Emergency Room. That’s the last place anyone wants to go, especially an emergency medical technician (EMT) and veteran volunteer firefighter like Joella.
​
Pain ripped through her chest. She fell backwards, but Peter was able to catch her before she hit the floor. As he held her, Peter watched Joella’s face turn purple and her pupils become fixed and dilated.
​
The day was June 21, 2013, the summer solstice. The longest day of the year. For Joella, it was going to be an especially long day.

Peter dialed 911, then immediately began cardiopulmonary resuscitation (CPR). It was apparent that Joella was having a heart attack. Like his wife, Peter was a volunteer firefighter with the Upper Yoder Fire Rescue in Johnstown. Days earlier, he had learned the new CPR protocol; his teacher was Joella, a CPR trainer.

The paramedics were at their home in three minutes. As they sped to Conemaugh Memorial Hospital in Johnstown, they called the hospital’s catheterization laboratory (cath lab) to alert them about Joella’s condition.

Once in the cath lab, doctors found a clot completely blocking her left anterior descending artery, the main artery that supplies most of the heart with blood. The survival rate of patients with a complete blockage in this artery is low – it is nicknamed the “widow-maker.” Her ejection fraction (EF), which measures the contraction strength of the main heart pumping chamber, was dangerously low at 15 percent, said Archana Sodagam, MD, a cardiologist who is currently treating Joella.

She was going into cardiogenic shock, a life-threatening condition in which the heart is suddenly unable to pump enough blood and oxygen to support the body’s vital organs.

In the waiting room, Joella’s son and husband were told to be prepared to make final arrangements – there was a good chance she wouldn’t make it.

Before proceeding with the angioplasty to open the blockage in her artery, physicians decided that Joella’s heart needed help – help in the form of an Impella 2.5®, the world’s smallest heart pump made by Abiomed. The device was inserted through a catheter in Joella’s femoral artery to her heart’s main pumping chamber, helping to pump blood out of her left ventricle to the rest of her body, allowing her heart to rest and hopefully recover. It also helped give her doctors time to safely perform an angioplasty procedure.

Joella was moved to the coronary care unit, where she remained temporarily on Impella support. Joella’s body was cooled and her body was sedated to protect her brain.
​
The city coroner – Joella’s boss at EMS – told Peter that it was unlikely she would survive. But they weren’t ready to give up. They had hope that Impella would allow Joella’s heart time to rest and recover. At her bedside was Peter, a union sheet metal worker as well as a volunteer firefighter and their son, 24-year-old Jonathan Bobak, a machine shop worker who is a volunteer firefighter with the West Hills Fire Rescue in Johnstown. Joining them were friends, family and fellow firefighters and emergency personnel.

After remaining under the effects of sedation for four days, Joella was warmed up and brought out of sedation.
​
She kept getting better. Her heart’s power measured by the ejection fraction kept climbing, reaching 40 percent (60 to 65 percent is normal). And her hospital room remained crowded with visitors.

“I remember waking up in the middle of the night and seeing 10 people sitting around my room eating cheeseburgers and shooting the breeze,” she said.

A week after her heart attack, Joella was able to walk out of the hospital and go home with her own, recovered heart.

One day, she and her husband were on their way to a cardiac rehab class when they got paged for a heart attack. Despite the fact she still had pain in her chest, Joella insisted that they go to the emergency.

She went in, got down on the floor, and started giving compressions. One of the doctors who had worked on Joella only weeks before was there, and she noticed he was getting a little teary-eyed. She asked him why.
​
He replied: “I’m so thankful to be on this side with you.”

“I told him, ‘We’ll do this later,’” Joella said.
​
But the impact of her heart attack on her life has been dramatic.

She lost 85 pounds since the heart attack and with that, her cholesterol has improved. She is exercising five times a week. Her heart is doing well, too – her EF is normal at 55 percent.
​
“Joella is doing great,” Dr. Sodagam said. “She can exercise – vigorous exercise – for more than an hour. She says she feels better than before the heart attack.”
​
Her passion for living a healthy lifestyle has extended to her entire family. Her son Jonathan has started running, and has lost 80 pounds.
​
As part of firefighter training, Joella recently rappelled out of a four-story building.

The way she thinks about life has changed, too.

“Things that used to bother me don’t anymore,” she said. She freely tells her friends, family and colleagues that she loves them.

She sees her role with the fire department and EMS as bringing compassion and empathy to people who are going through the worst day of their lives.
​
She is eager to tell her story, talking to group of paramedics, EMS classes, even high schools.

One day she attended a class led by an EMS instructor who had been at the hospital the day of Joella’s heart attack. He put up on the video screen her EKG strip that showed the electrical activity of her heart that day.

The lines on the strip made it “brutally real” for her to understand how close she had come to dying. She had to catch her breath. The instructor asked if she was okay, and she told him she needed a minute.

After a minute, the instructor asked his class what they thought the outcome was of the patient whose EKG was on the screen. Most students thought that the patient had probably died. They asked the instructor what the outcome was.
​
“Why don’t you ask her?” he told the class.
​
Joella talked to the class about her experience and showed them the Impella heart pump that helped save her life.

When Joella was in the hospital, her goal was to get out before her 45th birthday on June 30. She made it by two days.

“I don’t celebrate June 30 anymore, I celebrate June 21,” Joella said. “That’s the day my physicians and the Impella heart pump helped to recover my heart.